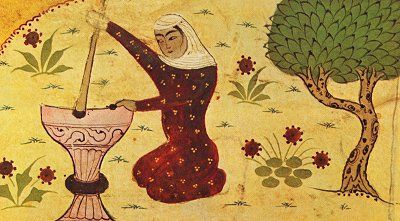 “Indeed in their stories, there is a lesson for people of understanding… (Surah Yusuf :111)

To call her the Ardent Lover of God would be an understatement, she was the unique one of her age who was always busy with devotions throughout the night. Her longing and fear was so intense that she was always in tears. It is related that at the time of her birth, her father saw the Prophet s.a.w. in a dream in which the Prophet s.a.w. gave him good tidings of a saintly daughter whom will intercede for 70 000 people of his community. The following is an anecdote that illustrates her high station and intense Love for Allah compared to the Saintly Men of her age…

Hasan al-Basri, Malik ibn Dinar and Syaqiq Balkhi went to pay her a visit. During which they discussed about veracity in Loving God. “Whoever does not show steadfastness and patience in facing the blows from the Beloved, is not true in his/her claims (towards Love)”, began Hasan. “I smell a trace of egoism in your statement,” Rabi’ah stated. Syaqiq said,”One who does not show gratitude when punished by his/her Master is not truthful in his/her claim.”
“There is still a state that is better,” Rabi’ah added. Malik tried,”Whoever does not bear with patience a trial from his/her Master with a peaceful and elated heart, is not truthful in his/her claim. “This also has room for improvement,” said Rabi’ah.
“Tell us then that which is better,” they asked Rabi’ah.
“One is not truthful in his/her claim (towards Love for God) until he/she becomes oblivious of the blows/trials/punishment because he/she is too absorbed/immersed in contemplating the Beloved. (Subhan Allah!) This is not something unheard of, it is similar to the state of the women of Egypt whom cut their own fingers as they stood amazed at the beauty of Prophet Yusuf a.s. (Joseph). Why should one be amazed (of this state) with regards to Contemplating the Creator?” stated Rabi’ah.

Shaykhul Akbar ibn ‘Arabi compared her to the likes of Shaykh ‘Abd al-Qadir al-Jeylani while Shaykh Farid ad-Din ‘Attar said,” …one who was consumed by the fire of Love, drowned in the longing for God…”

Shams @ Yasminah, Mother of the Poor
This was related by Shaykh ibn ‘Arabi

She lived at Marchena of the Olives where I visited her often. Among the people of our kind I have never met one like her with respect to the control she had over her soul… She had a strong and pure heart, a noble spiritual power and a fine discrimination. She usually concealed her spiritual state, although she would often reveal something of it to me in secret because she knew of my own attainement, which gladdened me…Her spiritual state was characterised chiefly by her fear of God and His good pleasure in her, the combination of the two at the same time in one person being extremely rare among us. I first met her when she was in her eighties.
One day when I was with her, she suddenly looked towards another part of the room and called out at the top of her voice, “Ali, return and get the handkerchief.” When we asked to whom she was speaking, she explained that ‘Ali was on his way to visit her and that on his way he had sat down to eat by a stretch of water. When he got up to resume his journey, he had forgotten the handkerchief. This was why she had called out to him; he had gone back and had retrieved the handkerchief. ‘Ali was at that time well over a league away. After an hour he arrived and we asked him what had happened to him on the way. He told us that he had stopped at some water on the way to eat and that he had then got up and left the handkerchief behind. He went on to tell us that he had heard our lady Shams calling him to return and get it, which he had done.

She lived at Seville. When I met her she was in her nineties and only ate scraps left by people at their doors. Her devotion to God was profound. I was almost ashamed to look at her face despite her age, her face was rosy and soft.
Once on the night of the ‘Eid, Abu Amir, the muezzin, struck her with a whip in the mosque. She gave him a look and left the place feeling very angry with him. In the morning she heard him calling to prayer and said, “O my Lord, do not rebuke me that I was affected by one who calls Your Name in the darkness of the night (muezzin) while other men sleep, for it is my Beloved who is mentioned on his lips. O God, do not censure him because of my feeling against him.”
The next morning the jurists of the locality went after the ‘Eid prayer, to convey their respects to the Sultan. This muezzin, full of worldly aspiration, went in with them. When the Sultan enquired who the fellow might be, he was told that it was only the muezzin. Then the Sultan asked who had allowed him to come in with the jurists and ordered him to be thrown out, which he was. However, after someone had pleaded with the Sultan for him he was left off, although the Sultan had intended to punish him. Fatimah heard about this and said, “I know about it, and if I had not prayed for leniency for him he would have been executed.”
She had married a righteous man whom God had afflicted with leprosy. She served him happily for twenty-four years until he was taken to God’s Mercy. When she became hungry and no scraps or offerings of food came her way she would be content and thank God for His favour in that He was subjecting her to that to which He had subjected his Prophets and Saints. She would say, “O Lord, how can I deserve this great position in that You treat me as You treated Your loved ones?” (Such is the humility of the Folk of Allah)